“Facts are irrelevant. What matters is what the consumer believes.” – Seth Godin

Smoking cigarettes gained popularity throughout the 20th Century until sales peaked in the mid-1960’s when it was estimated that over 40% of adults smoked cigarettes! In fact, by 1963 tobacco companies were selling so many cigarettes that on average each adult in America was smoking over a half-pack a day!

This popularity was a direct result of the incredibly successful marketing campaigns of brands like Lucky Strike who made consumers believe that their deadly product was actually healthy. In fact, they often inferred or directly stated that smoking would result in better health, weight loss, and had the approval of thousands of doctors. (20,679 to be exact!)

“Light a Lucky Strike when you are tempted to eat between meals. They satisfy the craving for sweets and rich pastries. That’s why thousands now reducing (dieting) smoke them constantly.” – Luck Strike ad, 1928

Many of Lucky Strike’s ads made dubious claims about the potential health benefits of smoking including weight loss. One of their most successful campaigns warned women and men to, “avoid that future shadow,” inferring that by smoking cigarettes you could stay fit, curb cravings, and avoid your obese and unhealthy destiny. 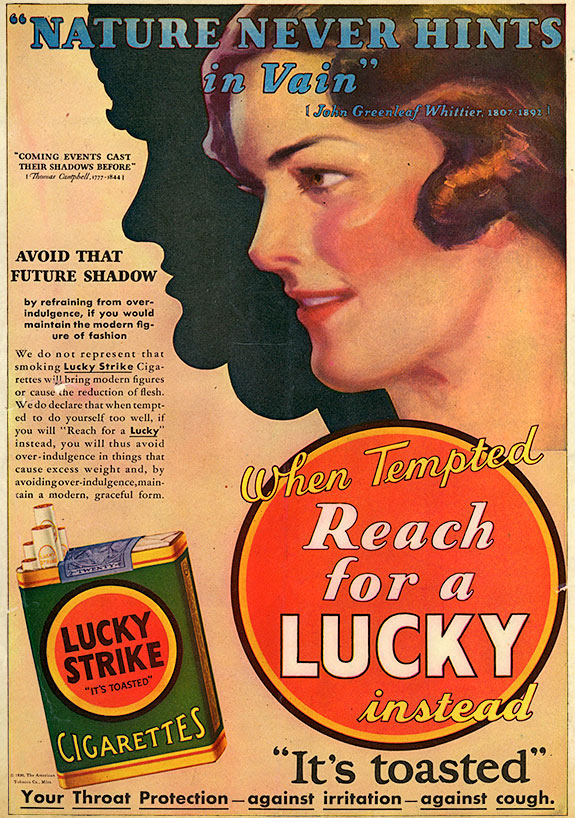 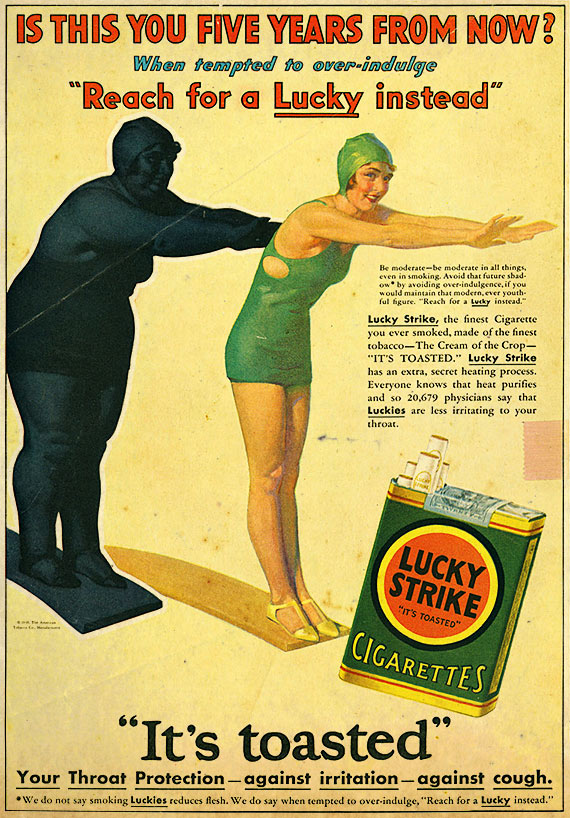 Is this (fat) YOU five years from now? 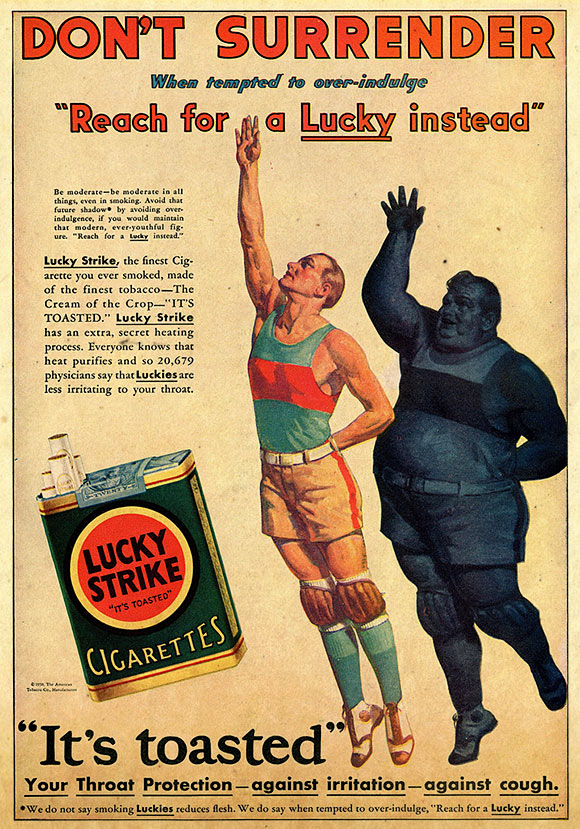 Don\’t surrender when tempted to over-indulge 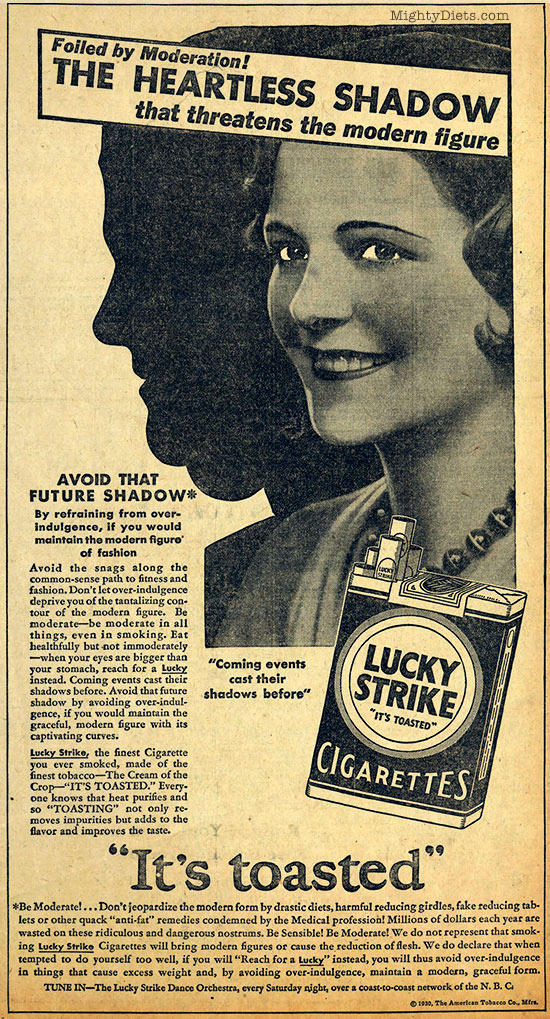 The heartless shadow that threatens the modern figure 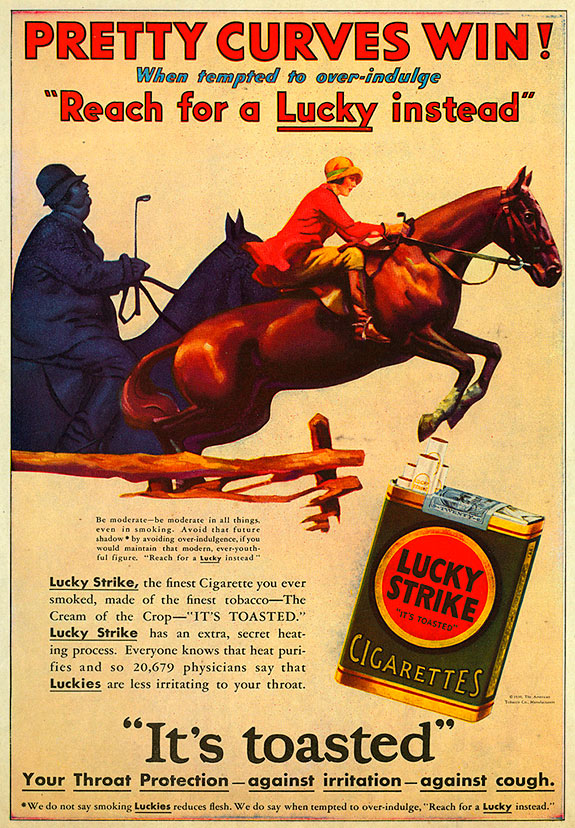 Pretty curves win, reach for a Lucky instead! 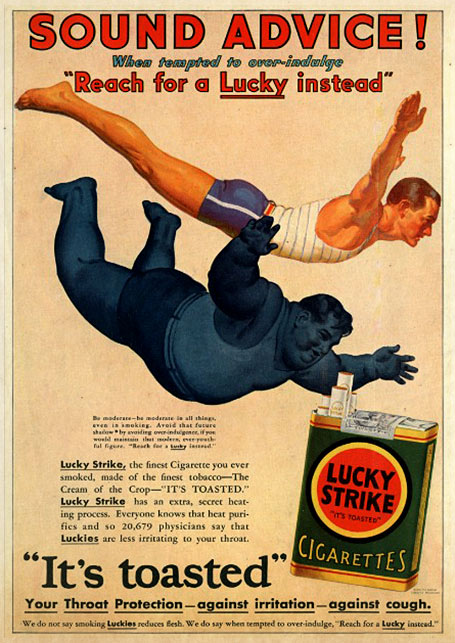 Sound advice! Avoid your future obese self by smoking 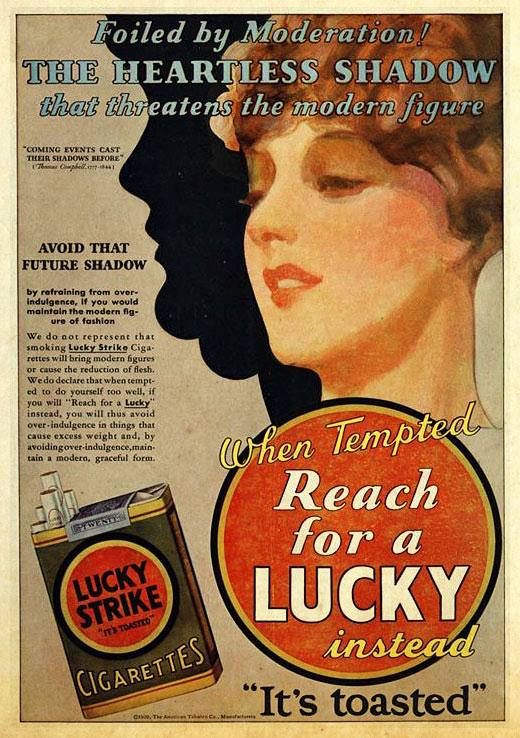 Foiled by moderation! Reach for a Lucky instead 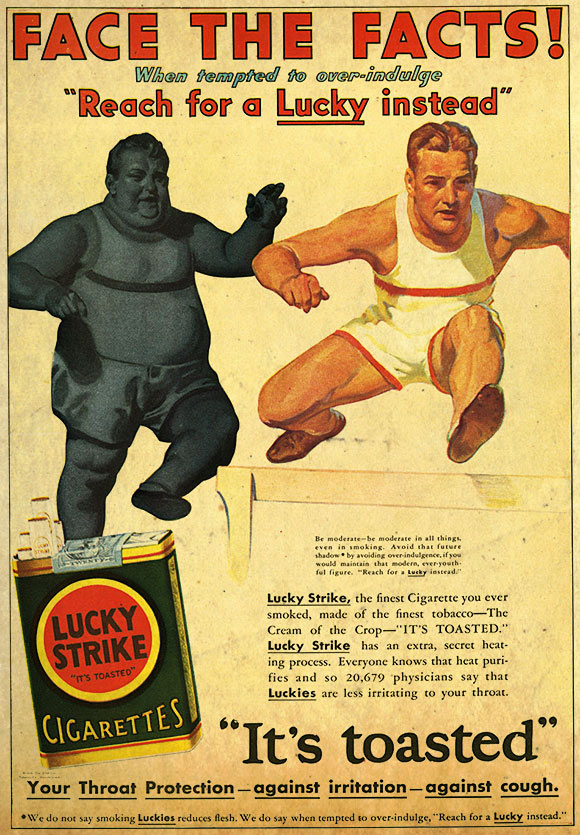 Face the facts: Smoking is healthy! 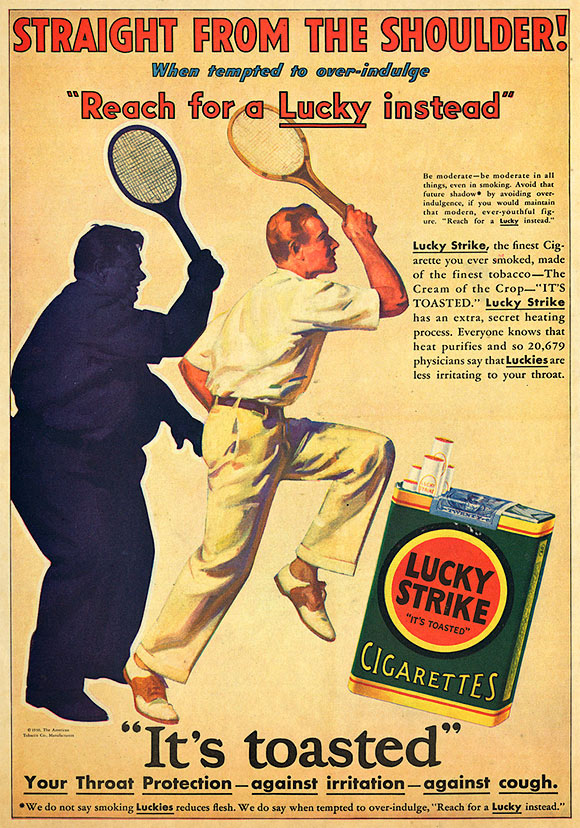 Avoid the future shadow and over-indulgence by smoking 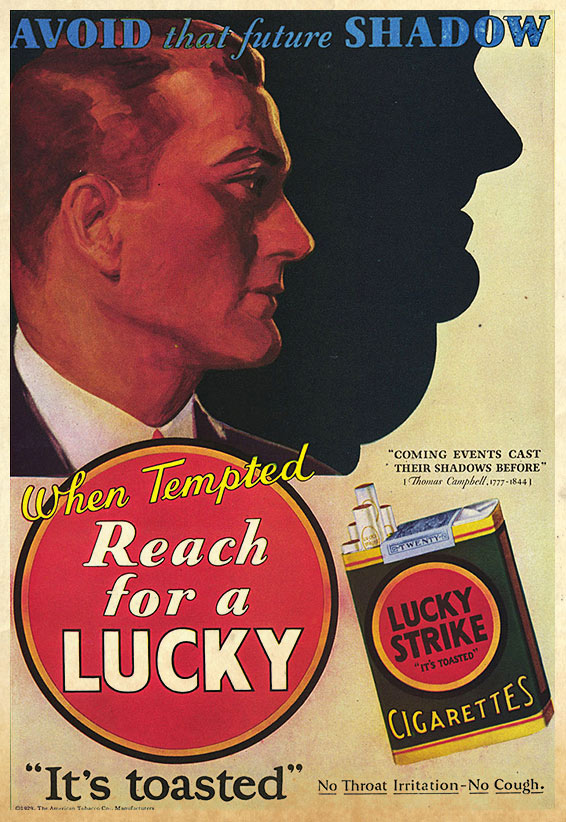 Avoid that future shadow. (That don\’t make no sense!?) 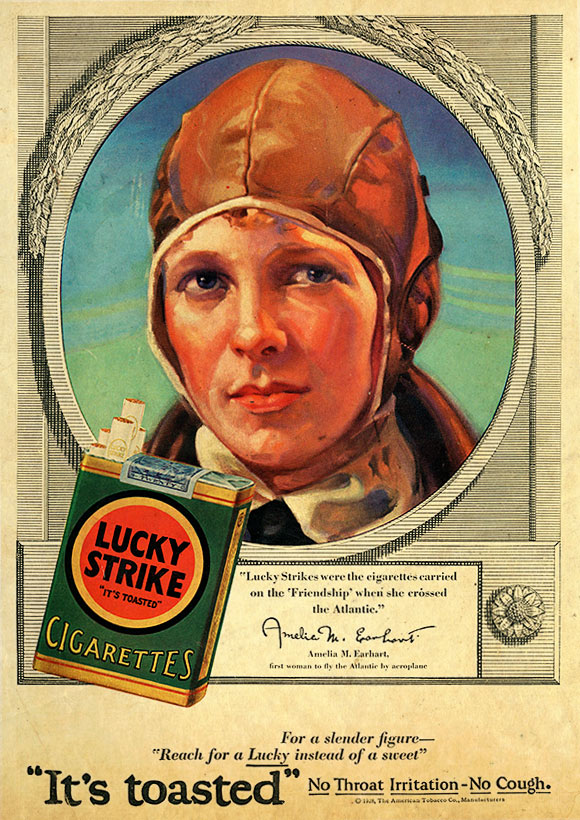 Amelia Earhart says, \”for a slender figure reach for a Lucky\” 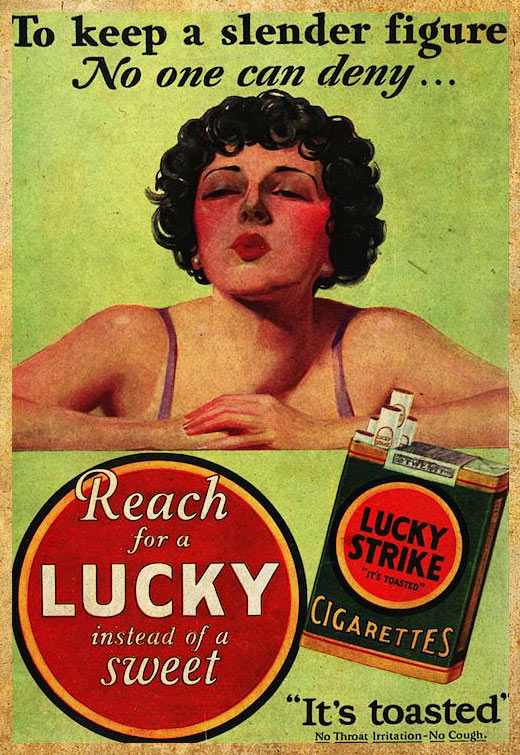 To keep a slender figure, reach for a Lucky instead of a sweet 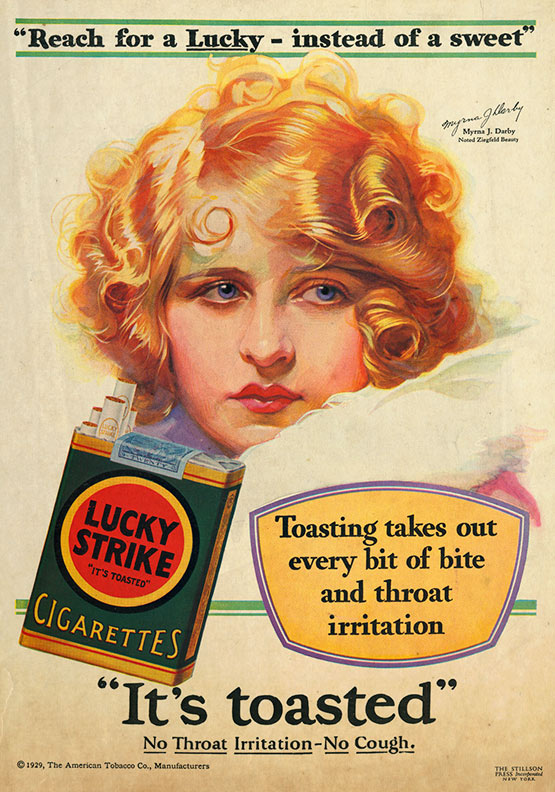 Noted beauty Myrna J. Darby says, \”reach for a Lucky instead of a sweet\” 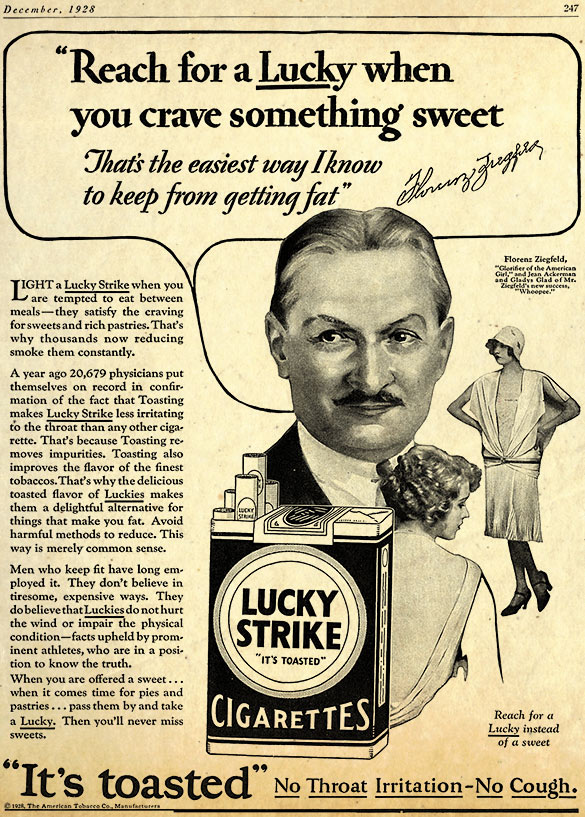 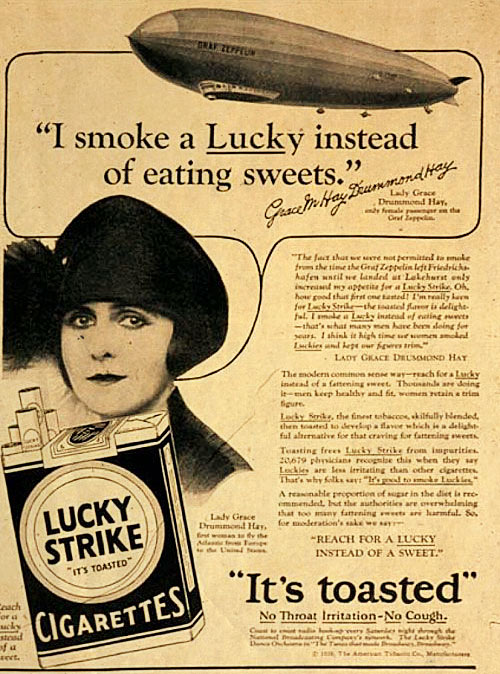 *Funny to read the fine print in some of these ads, as after the 1920’s they apparently had to put a disclaimer on some of the ads that implied weight loss:

“We do not represent that smoking Lucky Strike cigarettes will bring modern figures or cause the reduction of flesh. We do declare that when tempted to do yourself too well, if you will reach for a Lucky instead, you will thus avoid over-indulgence in things that cause excess weight, and by avoiding over-indulgence, maintain a modern, graceful form.”

“Reach for a Lucky when you crave something sweet. That’s the easiest way I know to avoid getting fat.” – Lucky Strike slogan / ad, 1928

“To keep a slender figure no one can deny, reach for a Lucky instead of a sweet” – Lucky Strike slogan

The bitter irony to Lucky Strike’s claims that smoking has health benefits and promotes weight loss is that exactly the opposite seems to be true.

Besides the obvious fact that 100% of doctors (not on a tobacco company payroll) will agree that smoking is terrible for your health, research also suggests that smoking promotes obesity and weight gain.

So, why are smokers more likely to be overweight? It seems that smoking cigarettes actually increases the cravings that they supposedly curb. Not only that, but smoking decreases serotonin levels which affects your sense of taste.

The combination of those two factors means that smokers eat more and taste less, which leads to weight gain.

*View their featured promotion (above) or all WW specials

Weight gain is not the worst side effect of smoking, which happens to be death. Despite Lucky Strike’s endorsement from celebrities and 20,679 doctors, Cancer.org concludes that:

“Smoking is by far the leading risk factor for lung cancer. About 80% of lung cancer deaths are thought to result from smoking. The risk for lung cancer among smokers is many times higher than among non-smokers. The longer you smoke and the more packs a day you smoke, the greater your risk.”

Ok, well it’s hard to put a positive spin on that conclusion. Hopefully we can end the debate over whether smoking and air pollution are bad for humans and the Earth, no matter how effective the marketing (or political) campaigns are claiming the contrary! – Kevin m