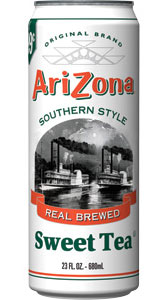 Sweet but deadly: Sweet Tea – Feeling like I needed a boost, I stopped in at our local CVS to pick up photos and grabbed one of those large cans of Arizona Sweet Tea. Ahhh… Just the name, “sweet tea” reminds me of living in the South as a kid, so I got a little bit of free nostalgia with my $1 purchase.

I was in a bit of a rush, so I only glanced at the nutritional facts on the side of the can which reported 23 grams of sugar. Not bad, I thought, as I remember sodas having a lot more. It wasn’t until I was half way done with the can that I double-checked the label, and to my horror, realized that sugar content was per serving, and a single tall can has 3 servings within!

One can of iced tea has three servings? Great, let’s make it a tea party!

As I mentioned, one of those tall cans reports containing 3 servings, so I’m wondering if people go out in groups of three to buy each can, or if a single person divides that can into thirds, drinking it over the course of a few days? Obviously it’s a tactic meant to confuse you from realizing the actual sugar content, which is part of the reason more than 1/3 of Americans are now obese; costing America billions.

Excuse me server, can I have 17 packets of sugar for my tea?

You are probably quick with math, and don’t need me to tell you that 3 times 23 equals 69 grams of sugar in just one can!

So, how much is that? Imagine getting an unsweetened ice tea at a restaurant, and adding 17 packets of sugar! (While everyone in the restaurant looks on in horror!) Sounds insane, but that’s what you’re getting in one can. You might get a free serving of Type 2 Diabetes with drinks like that.

Here’s what 17 packets of sugar on a plate looks like: (in one sweet tea) 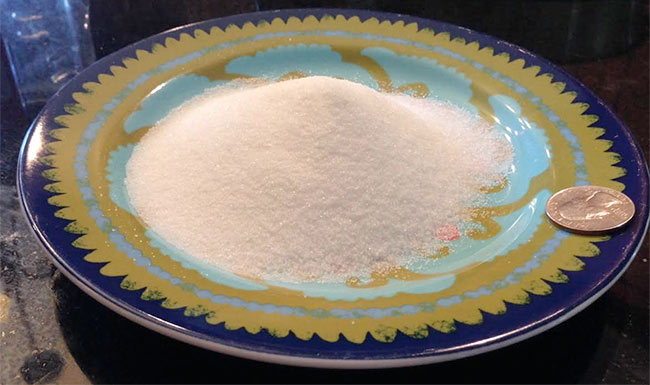 Consider that the World Health Organization recommends a daily sugar intake of only 25 grams, (6 teaspoons) so by drinking that Arizona Ice Tea, I was over the recommended intake by 300%, and hadn’t even eaten lunch yet!

Well, I’m not the first to be horrified by the amount of sugar in soft drinks, but even this surprised me.

So, how much is a gram of sugar anyway?

Beverage companies like to confuse you as to how much sugar they add, so they’ll report it in grams. The conversion is confusing, and it’s the same reason that casinos convert your dollars to chips; if you saw the dealer take a $20 bill from you every time you lost a hand of black jack, you probably wouldn’t stay very long at the table!

Anyway, if you’re trying to envision how much sugar a gram is, consider that a teaspoon of sugar equals 4 grams. That same amount is about what is in a packet of sugar in America.

If you think you’re making a good choice getting tea instead of soda, you might be wrong. I also noticed that the Arizona Rx Energy tea also has the same disgusting amount of sugar.

Sweet tea is currently making a comeback, and is offered at a myriad of restaurants from McDonald’s to Zoe’s Kitchen where the sugar content is similar to above. (They add ice, which reduces the amount of actual liquid in the cup though) It’s even worse than “lemonade” which often has more sugar than soda (one 16oz bottle = 52 grams of sugar) but also sounds like a better alternative. Please share!